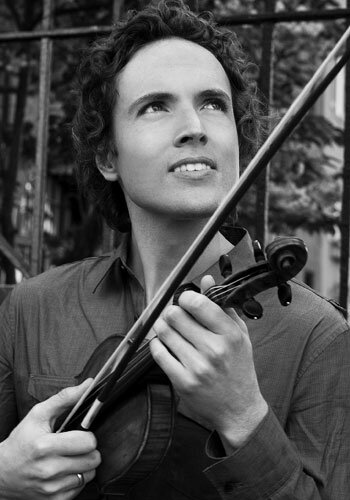 With his adventuresome spirit and vast musical gifts, violinist Tim Fain has emerged as a mesmerizing new presence on the music scene. The “charismatic young violinist with a matinee idol profile, strong musical instincts, and first rate chops” (Boston Globe) was, most recently, seen on screen and heard on the soundtrack of the new hit film Black Swan, and heard as the sound of Richard Gere’s violin in Fox Searchlight’s feature film Bee Season. Selected as one of Symphony and Strad magazine’s “Up-and-Coming Musicians,” Fain captured the Avery Fisher Career Grant and a Young Concert Artists International Award. As The Washington Post recently raved, “Fain has everything he needs for a first-rate career.”

He electrified audiences at debuts with the Baltimore Symphony with conductor Marin Alsop, at Lincoln Center’s Mostly Mozart Festival and with the Orchestra of St. Luke’s. He has also appeared with the Mexico City and Oxford (UK) Symphonies, Cincinnati Chamber Symphony, Brooklyn and Hague Philharmonics, and Curtis Symphony Orchestra in a special performance at Philadelphia’s Kimmel Center, was the featured soloist with the Philip Glass Ensemble at Carnegie Hall in a concert version of Einstein on the Beach and recently toured Europe in a duo-recital program with Philip Glass.

A dynamic and compelling performer in traditional works, he is also a fervent champion of 20th and 21st century composers with a repertoire ranging widely Beethoven and Tchaikovsky to Aaron Jay Kernis and John Corigliano. His provocative debut CD on Image Recordings of music for solo violin reflects Fain’s inquisitive passion and intellect, by combining old and new solo works by J.S. Bach, Fritz Kreisler, Kevin Puts, Mark O’Connor, Daniel Ott, and Randy Woolf. His new disc of short works by American composers, entitled River of Light, is about to be released on Naxos.

He has collaborated with such luminaries as Pinchas Zukerman, Richard Goode, Jean-Yves Thibaudet, Jonathan Biss, has appeared with the Mark Morris Dance Group, Seán Curran Company, and Bill T. Jones/Arnie Zane Dance Company, and appeared onstage with the New York City Ballet, performing alongside the dancers in the acclaimed premiere of Benjamin Millepied’s “Double Aria." He has also worked with jazz pianists Billy Childs and Ethan Iverson (The Bad Plus), guitarist Rich Robinson (Black Crowes), and appeared at Jazz at Lincoln Center with singer-songwriter Rob Thomas (Matchbox 20).

A native of Santa Monica, California, Tim Fain is a graduate of The Curtis Institute of Music, in Philadelphia, where he studied with Victor Danchenko, and The Juilliard School, where he worked with Robert Mann. Tim Fain performs on a violin made by Franceso Gobetti, Venice 1717, the “Moller,” on extended loan from Clement and Karen Arrison through the generous efforts of the Stradivari Society of Chicago.

You can find out more about Tim at Timfain.com and his facebook page